Blog
Home / Is An Evidence Based Belief On Shaky Grounds?
Tuesday, November 7, 2017

Is An Evidence Based Belief On Shaky Grounds?

I think that this argument is deeply flawed for a variety of reasons.

I Don’t Hang My Hat On One Argument

What would happen if one of these arguments were ever shown to be unsound? Would my belief in God collapse? Let’s say that The Big Bang was overturned some day, the second law of thermodynamics was somehow shown to not imply a universe of finite age, and the arguments against actual infinities were also refuted, so that we could not evidentially demonstrate The Kalam Cosmological Argument’s second premise (i.e “The Universe Began To Exist”), thus rendering the argument unsound? Well, we’ve still got The Ontological Argument, which argues that if God’s existence is even possible, then it follows that God exists. I would still believe in God in this hypothetical scenario because although the Kalam was shown to be garbage, no one undermined any of the premises of The Ontological Argument. Moreover, The Contingency Argument doesn’t even need the universe to have had a beginning in order for it to be sound. All the Contingency Argument needs with respect to the universe is that it needs the universe to not exist by a necessity of its own nature, which, as you’ll know if you read the article I linked to on that argument, can be demonstrated apart from arguing that the universe had a beginning to its existence. I could still say “The best explanation for the existence of the universe is God” on the basis of The Argument From Contingency despite there being no way to argue that the universe hasn’t existed forever. 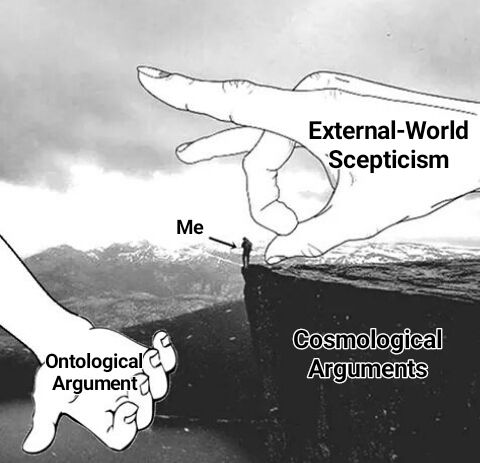 You see, if one basis their belief on a variety of arguments that all point to the same conclusion, then even if one or two of them were shown to be fallacious, it wouldn’t remove the epistemological justification for belief. The meme on the left-hand side gets this point across magnificently. In this meme, a person is about to be thrown into skepticism about the existence of the external world. Clearly, if the external world isn’t real, then The Cosmological Arguments (both The Kalam and The Contingency) will fail. You can’t say the best explanation for the origin of the world is a transcendent Creator if there is no world of which to have an origin. You can’t say God is the best explanation for the existence of the universe is there is no universe. However, the Ontological Argument doesn’t hinge on the universe at all, beginningless or eternal, existent or non-existent. The Ontological Argument, as even its detractors will tell you, all hinges on whether that first premise is true (i.e “It is possible that a Maximally Great Being Exists”). So, despite jettisoning the Cosmological Arguments on the basis of external-world skepticism, he still has a fallback argument to run to.

If The Sword Cuts At All, It Cuts Both Ways

“If you were argued into Christianity, you can be argued out of it.” — If we were to take this statement’s logic and apply it consistently, it would undercut even belief in God on an experiential or emotional basis. For example, one could say “If you came to know God through an experience of Him, you could come to know a false god through an equally powerful experience.” Suppose a person feels God’s presence in a mighty and inexplicable way during a church service as the pastor was preaching. As a result of this powerful experience, he comes to believe that Jesus is the one true God, that The Bible is true, that he is a sinner whom Jesus died for, and that God wants Him to follow Him. But 10 years down the road, he enters a mosque and hears the Quran being read. He now has the same type of experience he had before, only this time, he believes it’s Allah who is trying to get his attention. He abandons Christianity and converts to Islam.

“That could never happen” you might say. Why not? “Because Allah isn’t the one true God. You can’t have an experience of a god who isn’t there.” Well, isn’t it possible that demonic forces could cause an effect in a person like the above in an attempt to deceive him and lead him to apostatize? Remember, I’m arguing against a preacher here who believes The Bible in its entirety. He has to admit that the devil might play with someone’s mind to get them to commit idolatry. After all, he’s “the father of lies” (John 8:44), who “seeks to kill and destroy” (John 10:10) and “prowls around like a roaring lion, seeking someone to devour” (1 Peter 5:8), and can even make himself come off as an angel of light (2 Corinthians 11:14). This preacher has to keep open the possibility that demons could give people false religious experiences to get them to worship a false god. Why can’t we say “If you were experienced into the faith, you can be experienced out of it?”

If The Evidence Truly Did Point Away From Christianity, We Should Follow It

Thirdly, if the evidence truly did point to some other worldview, then we ought to hold to that worldview. It would literally be irrational to hold to a belief in light of overwhelming evidence to the contrary. If it could be proven beyond a reasonable doubt that God does not exist, I would become an atheist. If it could be proven beyond a reasonable doubt that the book of Mormon is divinely inspired, I would become a Mormon. Or if it could be shown that the Quran is inspired, I would become a Muslim. Of course, the evidence would have to actually be beyond a reasonable doubt. After all, this isn’t like deciding what kind of job to get. Eternity is on the line here! Being wrong can have devastating consequences. I’d have to be pretty darn sure that Christianity was false before I’d be willing to abandon it.

For any atheist reading this, you would have to (1) demolish all of the arguments for God’s existence and you would have to discredit The Minimal Facts Case for Christ’s resurrection, and then (2) you would have to provide a positive argument in favor of atheism. If you just do 1, I’ll just be left with agnosticism. For the Muslim, you would have to likewise discredit the historical case for Jesus’ resurrection, and you would have to either refute The Moral and Ontological Arguments or show that Allah is compatible with those arguments conclusion. As in chapters 4 and 5 of my book Inference To The One True God: Why I Believe In Jesus Instead Of Other Gods, I don’t think Allah is the one true God because He cannot be perfectly loving and He cannot be perfectly loving, because He isn’t a Trinity. God has to be a Trinity in order to be a God of perfect love because He wouldn’t be able to express love prior to the creation of any creatures to love. Love requires 3 things; (1) A lover, (2) A Beloved, and (3) a relationship between them. A Unitarian God doesn’t have all the requirements for love to exist until He creates other persons, which means He was lacking in the love department prior to making people. Since God must be morally perfect to be the standard of morality (The Moral Argument), and since a Maximally Great Being must have all great-making properties and have them to the greatest extent possible (The Ontological Argument), since love is a virtue and a great-making property then the God of The Moral and Ontological Arguments must have perfect love. Allah, a non-trinitarian god, doesn’t fit the bill. No polytheistic god fits the bill. No God consists of more than one person than Christianity’s God. Therefore, it is my inference that The Moral and Ontological arguments point to the God of orthodox Christianity. Pick up my book for other explanations for why Allah is not God.

What If A Christian Isn’t Relying SOLEY On Evidence?

For me, the reason my belief that Christianity is true is so strong is that I have both a plethora of arguments evidence as well as The Holy Spirit’s witness to my heart. I think my faith would be a lot shakier if I relied solely on arguments or solely on the inner witness. I believe in God because I’ve experienced Him….multiple times. I also believe in God because He is the best explanation for the origin of the universe, the fine-tuning of the universe, the fine-tuning of our local habitable region, the moral law, the possibility of doing science, the reliability of our reasoning faculties, and no explanation has been given over the past 2,000 years to explain the 5 minimal facts than “He is risen”.

Christianity is the inference to the best explanation, and moreover, God has been a living reality in my life. It seems to me that my belief has less of a chance of being destroyed if I lean on both of these epistemological pillars. If I relied on only one, either one, I think it would be a lot more fragile than it is.

Moreover, 1 John 2:19 says “They went out from us, but they did not really belong to us. For if they had belonged to us, they would have remained with us; but their going showed that none of them belonged to us.” This sounds almost exactly like what eternal security advocates say. “They were never saved. If they were, they wouldn’t have become unsaved.” The apostle John says “They went out from us, but they weren’t of us. If they were of us, they wouldn’t have left.” When eternal security advocates say to a former Christian “you were never saved. If you were, you wouldn’t have lost it”, they are merely echoing the apostle’s words in 1 John 2:19.

Now, I hold to a more nuanced version of eternal security than most Christians do, but I won’t get into that here. Just check out my 3 part series on what I’ve dubbed “The Can/Won’t Model Of Eternal Security”, here, here, and here.

Given this, if a person truly has been born again (John 3:3) and become a new creation (2 Corinthians 5:17), then regardless of how he came to believe that Christianity is true, he won’t stop believing it. He will be a Bible-believing Christ-Follower until the day he dies. So, the fact that some were “argued into the faith” doesn’t mean that they can be argued out of it, at least if they were truly born again.

This attempt by Tozer (or whoever it was) to undermine the legitimacy of an evidential faith fails. For one, most evidentialists don’t put all of their eggs in one basket. Secondly, this logic could be applied to believing in God on the basis of religious experience (what the preacher was arguing in favor of). Thirdly, it’s a false dichotomy to say that one’s belief is based on either evidence or religious experience (why not both?). And finally, given the doctrine of Eternal Security, even if a Christian did lean solely on evidence, if he were truly born again, he would never fall away. God would find a way to keep him from doing so.