It seems commonplace today for entire groups of people to be painted with a broad brushstroke and labeled as being afraid or fearful. The word “phobia” or “phobic” is often attached to the end of another word which is supposed to represent a group who is scared of other people.

So, what does it mean to be “phobic”? Consider Merriam Webster’s definition of phobia:

an exaggerated usually inexplicable and illogical fear of a particular object, class of objects, or situation

An extreme or irrational fear of or aversion to something.
‘she suffered from a phobia about birds’

Most have heard of certain types of fears. Here is a list of common phobias:Arachnophobia — Fear of spiders

Claustrophobia — Fear of being enclosed in a small space

Given these definitions, one whose fears do not follow logically or is an irrationally fearful person is “phobic.” Thus, this label can be used to communicate a psychological disorder with the person who was shot with the “label gun.”

We hear this quite often when Christians are typically labeled as “homophobes.” The one wielding the “label gun” is attempting to communicate to others (reading their labels), that Christians have an irrational fear of gay people. To be clear: as a Christian I am definitely not fearful or scared of homosexuals or anyone in the LGBT community. In fact, I do not know any Christians who are literally scared of gay people just because they are gay.

Christians do not hold an irrational fear of homosexuals; rather, most simply point out that the homosexual lifestyle is not intended by God — it is not the intended purpose of creation. Thus, the gay lifestyle “misses the mark,” and this is what it means to be sinful. These claims are not based in fear or hatred; they are grounded in love. Read my articles on this particular topic here, here, and here.

It is also quite popular today for Christians to be labeled as “Islamaphobes.” Is it irrational to fear Muslims? In one sense, perhaps, but in another sense, definitely not! The first thing we must realize is that it is vital to distinguish between irrational fears and healthy fears.

To be clear, although our world has been wrought with terror attacks from practicing Muslims since 9-11, the vast majority of Muslims are not violent extremists who wage jihad like those in ISIS. Thus, it seems irrational — in this sense — to fear all of those who are Muslim. After all, just because some Christians are mean to non-believers, it does not follow that all Christians act in a similar fashion.

There is a huge and vital difference, however, between these propositions. We are discussing ideologies. Specifically, we are discussing the teachings and commands of Mohammad and of Jesus — they differ drastically!

So, if one believes that Christianity it true, and they are not living consistently with the teachings of Jesus Christ (what Christianity is based on), if they come to think they should start living consistently with what they believe, then they will start loving all people from their neighbors to their enemies. The obedient Christ follower will make a daily attempt to not be mean and to love and respect all people as Jesus commanded. So, unless one fears being treated with love and respect, it would be nonsensical to fear a person who believes that Jesus’ commands correspond to reality and that our actions ought to correspond to reality too.

However, if one believes that Islam is true, then even if they were not living consistently with the teachings of Mohammad — and were not violent terrorists trying to kill all the infidels (they are peaceful) — it is still quite rational to have a healthy fear of this Muslim. Why is this? Because if he or she believes Islam is true and then starts to understand all that Mohammad actually commanded, and then decides to start living consistently with what they believe, then it follows that there is a good chance that they will harm you, or anyone else who is not a Muslim.

The Conflation of Ideas & Race

I will get back to that topic shortly. Before I expand on this, however, it is important to point out that many today seem to imply that if one is fearful of what Islam teaches, then you must be a racist (another label)! Those who assert this are once again guilty of the logical fallacy of conflation. Namely, conflating the beliefs of an individual with their DNA. These are two completely different issues that should not be conflated.

Allow me to make my point: regarding Islam — I am “Islamaphobic” (in a sense)! This is because I have an educated understanding of what Mohammad actually taught and commanded. Thus, all “good” Muslims (the ones who strive to live according to Muhammad’s teachings) should be feared because they want to convert or kill everyone who is not a Muslim.

Now, this has nothing to do with race (and to conflate this with race as mentioned above is a logical fallacy)! After all, if a white guy became a Muslim who believed he should “kill the infidel” as Mohammad commanded, then I would be just as “Islamaphobic” of that white guy because he wants to kill me. It is healthy and rational to fear those who want to kill you! This is about ideas — not race!

Thank God most Muslims are “bad Muslims” and do not follow all the teachings of Mohammad. However, as David Wood has shown, it does not take much to get an inconsistent Muslim (one who is peaceful) to become a consistent and “good muslim” (one who wants to kill you)! That is what scares me — but that is a healthy fear based on what Mohammad actually commanded.

Consider the “Three Stages of Jihad” from David Wood:

As stated above, most Muslims are peaceful (thank God), but this is because they lack one of three essential ingredients that a seemingly “good” Muslim 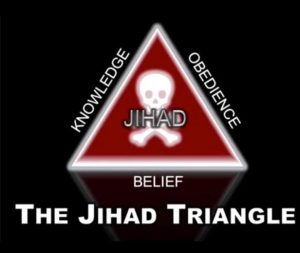 The foundation of the Triangle of Jihad is a simple belief that Islam is true. This belief does not have to be justified as one can hold this belief merely because their father told them that “there is no God but Allah.” This foundation is not sufficient for Jihad and terror, but it is a necessary condition.

The second part of this triangle is knowledge. That is, the individual believes that Islam is true and now they study the Qu’ran and the Hadith to understand exactly what Mohammad taught and commanded. Basically, this is an educated Islamic believer.

The final part of the triangle of jihad is obedience. An educated Islamic believer who has reached the decision that he ought to be obedient to Allah’s prophet is one who everyone should fear! This individual believes that Islam is true, understands that Mohammad commanded Muslims to kill everyone who is not a Muslim, and they believe they should obey Mohammad’s teachings, and thus, they want to kill you!

It is vital to note that Jihad all starts with one simply believing that Islam is true. So, even though it seems safe to say that Kareem Abdul Jabbar, Cat Stevens, Dave Chappelle, or Lindsay Lohan (the latest convert?) probably will not attempt murder, they do possess the first necessary condition that logically leads to the other two lines of the jihad triangle. Let’s hope these Muslims never gain an understanding of what consistent Islam entails.

Bottom line: it is not a phobia if a fear of something or someone is justified and thus, a rational fear. In fact, it seems irrational to not possess a healthy fear of a person whose worldview entails your demise.

Why the pulpit must be political

Yes, We Can Make the Case for Christianity with Music

Are the Gospels “hopelessly contradictory”?