It is provocatively titled “All Scientists Should Be Militant Atheists.”  Not just an atheist, but a militant atheist.  Krauss, has risen in fame in the past few years, penning such books at The Physics of Star Trek and The Universe From Nothing. In an interview with Sam Harris, he describes himself as “as an anti-theist rather than an atheist.”  Krauss has had multiple debates with William Lane Craig here in the United States as well as in Australia (here and here and here).  He even did a movie with Richard Dawkins titled The Unbelievers. Dr. Craig did a series of podcasts commenting on the film.

In his September 8 article in The New Yorker, Krauss claims that “it’s inevitable that [science] draws people away from religion.”  Oddly enough he just merely asserts this claim without any evidence or argument.  Are we to just believe him on blind faith.  If science inevitably draws people away from religion how does he explain Francis Collins, Sarah Salviander, John Lennox, Neil Shenvi, Ray Bohlin, Michael Strauss, John Polkinghorne, or Alister McGrath.  Or how the book True Scientists, True Faith explores how twenty of the worlds leading scientists explain how their science enhances their faith and their faith undergirds their science.

Even more oddly is his focus in the article on issues that have nothing to do with science at all.  In eleven full paragraphs a total of seven were on social issues like Kim Davis, Hobby Lobby, the shame people feel for questioning their parents faith, and Planned Parenthood.  As Edward Feser says in his article Krauss discusses “matters of public controversy entirely irrelevant to either science or the question of God’s existence.”

He surely has a right to express his opinion on issues entirely outside his domain of expertise, but they carry no more weight as a business student has in expressing his views on the background radiation in the cosmos.  When he does he reveals aptly how sophomoric his reasoning is on the issue of God and science.  As Plantinga said about Dawkins and his book The God Delusion I believe the comments apply to Krauss as well:

Dawkins [and Krauss] is not a philosopher (he’s a biologist). Even taking this into account, however, much of the philosophy he purveys is at best jejune [i.e., naive, simplistic, and superficial]. You might say that some of his forays into philosophy are at best sophomoric, but that would be unfair to sophomores; the fact is (grade inflation aside), many of his arguments would receive a failing grade in a sophomore philosophy class.

Below are some articles that react to Krauss:

“Scientists Should Tell Lawrence Krauss to Shut Up Already” by Edward Feser in Public Discourse The Witherspoon Institute, Sept. 28, 2015. 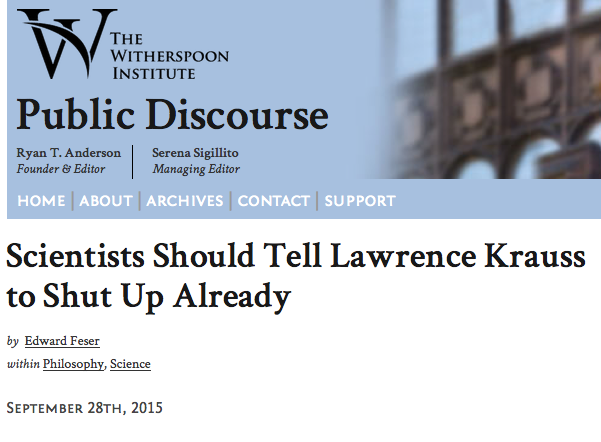 Feser is as entertaining as he is educational.  A partial excerpt:

The closest Krauss comes to justifying his thesis is in the following passage:

science is an atheistic enterprise. “My practice as a scientist is atheistic,” the biologist J.B.S. Haldane wrote, in 1934. “That is to say, when I set up an experiment I assume that no god, angel, or devil is going to interfere with its course and this assumption has been justified by such success as I have achieved in my professional career.” . . . In my more than thirty years as a practicing physicist, I have never heard the word “God” mentioned in a scientific meeting. Belief or nonbelief in God is irrelevant to our understanding of the workings of nature . . .

Checkers is an atheistic enterprise. My practice as a checkers player is atheistic. That is to say, when I move a game piece across the board, I assume that no god, angel, or devil is going to interfere with its course and this assumption has been justified by such success as I have achieved in my career as a checkers champ. In my more than thirty years as a checkers player, I have never heard the word “God” mentioned at a checkers tournament. Belief or nonbelief in God is irrelevant to our understanding of the workings of the game.

So, it isn’t just science—even checkers proves atheism! Who knew?

“Why Can’t These Guys Stay on Topic? Or Read?” by Edward Feser at Edward Feser Oct 4, 2015 – Here Feser responds to some criticisms of his critique of Krauss.

“Should Scientists Be Atheists? More Nonsense From Lawrence Krauss,” by Kelly James Clark in The Huffington Post, Sept. 14, 2015.

Philosopher Kelly Jame Clark in The Huffington Post lambastes Krauss for his lack of elementary logic and non-scientific ranting:

While Lawrence Krauss has publicly denounced philosophy, he can’t seem to stop himself from doing it and doing it badly (and publicly, to boot). His lack of intellectual self-control is remarkable given that he is an accomplished physicist. He might have profited in his latest rant, “All Scientists Should Be Militant Atheists,” by a course in elementary logic.

This diatribe was prompted by the case of Kim Davis, the Kentucky county clerk who refused to issue marriage license to gay couples. He writes of militant atheism and science, “I found myself thinking about those questions this week as I followed the story of Kim Davis….” How this totally non-scientific event is relevant to his scientific thesis is mind-boggling.

“Portrait of a Fanatic” by Kevin D. Williamson The National Review Sept. 11, 2015

At the National Review Kevin D. Williamson reacts as well:

As we have seen with the likes of Neil deGrasse Tyson and Bill Nye the Politics Guy, when scientists and the scient-ish (Mr. Nye is a mechanical engineer by training) step out of the confines of their actual expertise, what they step into is more closely associated with the field of animal husbandry. But step in it they do, Professor Krauss with more enthusiasm than most. Professor Krauss’s argument is shockingly sophomoric, the sort of thing that all of us heard, and most of us tired of, during late-night dorm-room debates when we were teenagers. His intellectual sloppiness is both embarrassing and worrisome; one must wonder what sort of intellectual standards Arizona State expects of its faculty engaged in public matters.

This video is related to Eric Metaxas Wall Street Journal article which quickly become the most viewed online article in the journal’s history:

Steve Lee is a graduate from the CrossExamined Instructor Academy.

5 Arguments for The Existence of Free Will

Did the Apostles Really Die as Martyrs?

Got Karma? Misses and Misuses

The Case for the Pre-Existence of Christ: The Birthday that was Not the Beginning

10 Things Children Should Learn About Faith

The Trinity in the Old Testament (Part 4): The Divine Logos