Christopher Hitchens: Evidence of a Divine Being 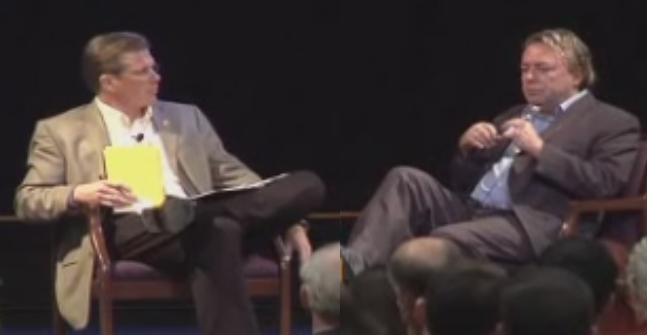 I am greatly saddened that Christopher Hitchens is gone.  There is no one with whom I disagreed more who I admired so much.

I emailed Christopher several times since his diagnosis with cancer, my last correspondence with him occurring the day after Thanksgiving. I expressed my prayers and concern for him.  He responded immediately and graciously, and even said he would “love to renew our debates.”  That gave me hope he was recovering.  Now all hope is gone.

Although he was an opponent of my Christian worldview, I never felt that he was an opponent of me personally.  I met him for the first time backstage in September 2008 at Virginia Commonwealth University before the first of our two debates.  It was my first debate with anyone (save my wife, who routinely annihilates me), and I had studied mightily to go up against such a brilliant intellect.  Upon meeting him I said, “Christopher, I know we are on different sides of the God issue, but I appreciate you and your work.  In fact, I’m kind of a fan.”  He paused, shot me a mischievous look, and declared, “The night is young!”

That night we had a spirited but rambling exchange.  Hitchens could read technical manuals and keep an audience spell bound, so our audience was entertained.  But as even one of the atheist organizers of the event admitted, he rarely directly engaged my arguments for God during the debate.  He did little better in his book, dismissing over two millennia of rigorous philosophical argumentation for theism from Aristotle to Aquinas to Craig in less than nine pages.

In our second debate I asked him how, as an atheist, he explained the origin of the universe out of nothing—that all space, time and matter had a beginning out of non-being, which would imply that its cause is spaceless, timeless and immaterial.  Indeed, since nature itself was created, the evidence points to an uncaused First Cause that transcends nature.  After a long joke that went nowhere (but did entertain), Hitchens finally rested on the fact that he was not a physicist.  Of course, that wouldn’t mean he could just ignore the evidence from physics.  But he did and many in the audience applauded.  Even my Dad, who was present that night, was impressed with Christopher’s ability to woo an audience while avoiding the question!

Hitchens was also a man of courage. Backstage at our second debate in March 2009, I asked him if he ever got death threats for his outspoken opposition to Islam. “Islamofacism” he called it.

“Have you gotten security?”

“There’s no use for that,” he informed. “Those who want to kill you won’t warn you anyway.”

Later in the Q&A portion of the debate, a Muslim student urged Hitchens to consider the Qur’an.  Without hesitation, Hitchens blasted, “If you want to know what I think about the Qu’ran, you can read my book.  I have a whole chapter on it.  And when you read it you will see the Qu’ran for the garbage that it is!” The edited-for-TV debate left that question and response out of the video, but Christopher was unafraid of any future retaliation from “the religion of peace.”

Hitchens tended to lump all religions together, showing nearly equal scorn for the Bible.  “Religion poisons everything” was his subtitle, which is a witty way of saying that religion is evil.  But how can there be evil unless there is an objective, unchanging standard of Good?  When pressed to explain the existence of an unchanging standard of Good without God, Hitchens cited the changing biological process of evolution.  But a changing biological process cannot explain the existence an objective, unchanging moral law.  Hence, by complaining that “religion poisons everything,” Hitchens was borrowing from God in order to argue against Him.  (The truth is religion doesn’t poison everything—everything poisons religion.)

But none of that mattered to the causal observer.  Even those who knew that Christopher’s arguments were often emotional and foundationless found him appealing.  Dr. Edward Feser, who dismantles the arguments of the New Atheists in his book The Last Superstition, put it well in his blog last Friday.  He wrote, “Of the four horsemen of the New Atheism, Hitchens was the only one I found likable, and the only one possessed of a modicum of wisdom about the human condition, or at least as much wisdom about the human condition as one can have while remaining essentially a man of the Left. While there was rather too obviously something of the champagne socialist about him, I do not doubt that he had real concern for real human beings — rather than merely for grotesque abstractions like ‘the working class’ or ‘humanity’ — and that he showed real moral and even physical courage in defense of what he sincerely took to be the best interests of real human beings.  But love for one’s fellow man, however genuine, is only the second greatest commandment.”

I don’t see how anyone who knew Christopher Hitchens could think that a man with such admirable qualities and talents was nothing more than a collection of chemicals– the product of unintelligent processes.  Christopher’s intellect, wit, courage, passion, and immense personal charm are evidence to me of a Divine Being– a Divine Being who loves human freedom so much that He would even allow the gifts He bestows to be used against Him.

For those who think that Christopher would be upset that his death furthered the idea of God, please keep in mind that I think his life furthered the idea. If he were still here, he would debate that, but he wouldn’t be upset that a debating opponent thought he was evidence of God.  Christopher Hitchens was too big a champion of free thought to begrudge a man his argument.  I am blessed to have known him.