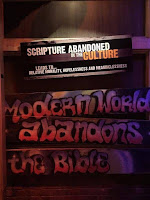 I saw this meme on social media the other day. It states “Scripture abandoned in the culture leads to relative morality, hopelessness, and meaninglessness.” It caught my attention because of how its author attempts to ground morality, hope, and meaning. Even though skeptics of Christianity do not have the correct worldview, they still have the ability to identify contradictions, unsound arguments, and false claims made by adherents of other worldviews (in virtue of their being created in the Image of God). If a defender of the Christian worldview attempts to ground morality, hope, and meaning in an invalid source and defend that incorrect grounding, a knowledgeable skeptic will be able to identify the faulty claim and use that as a reason to remain skeptical of the claims of Jesus Christ. Unfortunately, this meme offers the incorrect grounding for morality, hope, and meaning. It is important that we understand how the grounding is incorrect, the implications of its being incorrect, and what the proper grounding is, so that we can be prepared to give a reason for the hope that we have when a skeptic challenges the claims of this meme.

Grounding Morality, Hope, and Meaning in Scripture Morality, hope, and meaning are important components of any religious worldview. They provide a worldview’s adherents an explanation for their existence and a framework by which to fulfill their purpose, according to that worldview. For any worldview adherent, these components come with deep, emotional connections that are difficult to overcome.

Almost every religious worldview has some kind of “holy writings” commonly called “scripture.” Christianity has the Bible; Islam has the Qu’ran, and Hinduism has the Vedas, just to name a few. All these “holy” books speak about morality, meaning, and hope (to some extent). But they all make conflicting claims about each of these, and adherents to each may make the claim that meaning, morality, and hope are all grounded in their “holy” book(s). So, adherents to each of these worldviews logically also make the claim that a culture that abandons their scripture (for another scripture, or nothing at all) is doomed to live with relative morality, hopelessness, and meaninglessness.

The Problems and Implications

For the defender of a worldview, appealing to an abandonment if their scripture is not believed and followed seems logical because they know that others seek these things as they do. But, if all the worldviews are making the same claim (that their scripture grounds morality, hope, and meaning), what is to keep a skeptic from going to one of the other worldviews to find the same type of claims that have content that seems more palatable (such as a different ethic or different way to heaven or nirvana)? What is the reason that a person should believe and follow any one particular scripture?

If the Christian is to claim that morality, hope, and meaning are grounded in the Bible, then our claims are on even ground (ontologically speaking) with all the other worldviews from the perspective of the skeptic. This appeal does provide a reason to not abandon the Bible, but it provides the same to not abandon the Qu’ran, Vedas, etc. From the perspective of the skeptic, since all these “holy” books make claims about morality, hope, and meaning, and none of them are grounding them outside their cultural/relative “holy” books, it appears as though these actually are relative. And, logically, if the appeal is dependent upon a warning to avoid what is real, then that is more reason for the skeptic to run the other direction (and they know it and often do).

The Proper Grounding and the Proper Role

Let’s look at the claim again. “Scripture abandoned in the culture leads to relative morality, hopelessness, and meaninglessness.” The reason the problems that I just described exist with this claim is because the claim simply is not true. Morality, hope, and meaning do not find their grounding in the Bible (or any other “holy” book, for that matter). That is not the claim of Christianity. The Christian claim is that these find their grounding in God. God is independent of cultures and interpretations, thus there is no way that morality, hope, and meaning are relative or subjective if Christianity is true.

Now, this affects the defense of the Christian worldview from two different directions. First, the defense of objective morality, hope, and meaning grounded in God (the biblical view) can take place by providing the evidence for the existence of the Christian God to relativists. This is presented by taking the claims of the various “holy” books of the world and putting them to the test against reality. Scientific evidences for God’s existence, and for the idenfication of the Creator as the Christian God, by necessary implication are then arguments for objective morality, hope, and meaning.

Second, for an atheist who holds to objective morality, hope, and meaning, they must find the grounding for those in something that is independent of cultures or individuals. The claim that these are grounded in the Bible does not satisfy that ontological requirement; however, the claim that these are grounded in God does. Then the fact that the atheist already recognizes the objective morality, hope, and meaning, by necessary implication becomes a logical reason for them to believe that God exists. And combined with the other arguments for God’s existence and the specific identification of that God as the Christian God, provides a powerful case for the truth of the Christian worldview.

The implication of my critique is that it is not the abandonment of the Bible that leads to relative morality, hopelessness, or meaninglessness. Rather it is the abandonment of the Christian God that leads to those things. But I must be clear that the abandonment of the Bible will put us at a great disadvantage to discover what is true about objective morality, hope, and meaning. While scientific and philosphical arguments may be presented to demonstrate that God does exist, that would only establish that these three also exist (and may point us in the general direction of the correct content); it would not necessarily say anything about what is right or wrong (morality), why we are here (meaning), or our hope (what is wrong with us and the solution). We do need the Bible to learn the content. But we do not need the Bible to ground the content. This is the difference between the philosphical categories of ontology (what is real) and epistemology (how do we know what is real). Misunderstanding this distinction is likely the reason for the claim of the meme. It is important that we recognize this distinction and not conflate the two categories; otherwise, we run the risk of making the same mistake as the author of the meme.

The claim in the meme that the Bible is the ground for morality, hope, and meaning cannot stand when placed side-by-side against the same claim of competing worldviews. Because of that, it actually works against the very intended purpose of the meme. By recognizing that morality, hope, and meaning are not grounded in the Bible but in the God of the Bible, all the negative implications can be avoided and a reason for the hope that we have can be provided and demonstrated.

To Further Investigate This Grounding, I Recommend:

Can Man Live Without God?– by Ravi Zacharias