William Lane Craig is famous for resurrecting and defending the Kalam Cosmological Argument (KCA). The argument appeals to both philosophical and scientific evidence for the beginning of the universe. If the Kalam is sound, it seems to prove the existence of God.

The question is raised: Is the argument sound given our modern, scientific understanding of cosmology? In this essay I will review and examine the premises of the Kalam to see if we have good reason to affirm them as probably true. The standard form of the KCA goes as follows:

We can add the following steps:

All science is based on cause and effect relationships. Zero evidence exists that this premise is false and so this premise has never faced any serious or informed challenges. In our daily experience, objects do not pop into existence uncaused.

Scientists have proposed a number of possible causes of the Big Bang including colliding branes in string theory, false vacuum in inflationary theory, and quantum fluctuations in quantum mechanics. Each of these ideas propose a “universe generator” of some type that must exist prior to our Big Bang. Scientists recognize that the Big Bang must have a cause.

William Lane Craig often refers to BGV theorem in his debates with atheists. (The theorem is often misunderstood to be a singularity theorem. It is not. It is an incompleteness theorem. But it is completely compatible with the singularity theorems.) BGV theorem states that any universe which is on average expanding throughout its history cannot be eternal into the past but must have had a beginning. This is an extremely robust theorem. Within a classical spacetime, BGV theorem does not depend upon any particular energy condition (low energy, high energy) nor does it depend on any particular solution to Einstein’s equations. The fact the theorem is so robust makes it very difficult to evade. It applies to multiverse theories and cyclic universe theories. Any past eternal cosmological theory must evade BGV theorem.

In his debate with William Lane Craig, Sean Carroll referred to his paper titled “What if time really exists?” and its Quantum Eternity Theorem.

In Carroll’s post-debate reflections, he writes:

“Indeed, I quoted a stronger theorem, the “Quantum Eternity Theorem” (QET) — under conventional quantum mechanics, any universe with a non-zero energy and a time-independent Hamiltonian will necessarily last forever toward both the past and the future. For convenience I quoted my own paper as a reference, although I’m surely not the first to figure it out; it’s a fairly trivial result once you think about it.” (Click here)

Some models have been proposed than can evade BGV theorem. We will look at a few of these theories in greater detail.

A. The first of these is the Aguirre-Gratton model supported by Sean Carroll in his debate with Craig. Obviously, Carroll thinks this model is the strongest possible, the most likely to be true, or he wouldn’t have used it to support his position that the universe may be past eternal. But what is the Bayesian probability this model describes our universe?

In the Abstract of his paper “Eternal inflation and its implications,” Alan Guth writes:

On page 14 of the same paper Guth writes:

“If the universe can be eternal into the future, is it possible that it is also eternal into the past? Here I will describe a recent theorem [43] which shows, under plausible assumptions, that the answer to this question is no.”

According to Guth, under “reasonable assumptions” and “plausible assumptions” the BGV theorem cannot be avoided. On page 16, Guth discusses the Aguirre-Gratton model with its reversal of the arrow of time and explains that this model does evade BGV theorem. The natural conclusion is that the Aguirre-Gratton model does not have reasonable or plausible assumptions. Aguirre and Gratton have not put forward any plausible mechanisms that might cause the arrow of time to reverse and no reversal of time has ever been observed.

Remember this is the best model that Sean Carroll had to represent his view that the universe is past-eternal. A Bayesian probability that the Aguirre-Gratton model applies to our universe is <1%.

However, this cosmological model has serious problems. A recent paper titled “Perturbative Instability of Cosmology from Quantum Potential” has the following Abstract:

“Apart from its debatable correctness, we examine the perturbative stability of the recently proposed cosmology from quantum potential. We find that the proposed quantum corrections invoke additional parameters which apparently introduce perturbative instability to the Universe.”

Our universe is stable. This model does not produce a universe like the one we observe. The Bayesian probability of this model being correct is less than the Aguirre-Gratton model and is <1%.

C. Emergent Universe Models – This class of models successfully evade BGV theorem. The idea is that a “cosmic egg” that exists forever until it breaks open to produce an expanding universe. Proponents of these ideas include Ellis, Barrow, Campo, Wu, and Graham.

Mithani and Vilenkin show that this class of models can collapse quantum mechanically, and therefore cannot have an eternal past.

A Bayesian probability of Emergent Universe Models being correct is <1%.

Side Note: What About Guth? 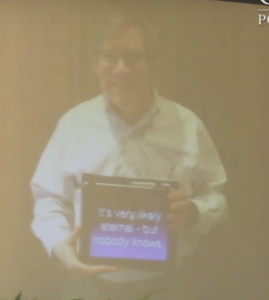 Someone may mention the photo of Alan Guth holding a sign at the Carroll/Craig debate that read [The universe is] very likely eternal but nobody knows.” Why would Guth pose holding that sign when all of his scientific papers say the universe had a beginning? Some assumed Guth was going to publish a new paper that explained his change of view, but it’s been three years and no paper has been published supporting a change in the science.

Perhaps Guth posed for that picture just as a favor to Carroll.

In order to defeat premise #2, skeptics must be able to show that a past-eternal universe is more likely than a universe of a finite age. While a number of past-eternal models have been proposed, the cosmological community has rejected all of them as highly unlikely. A Bayesian probability can be assigned to premise (2) of 98%.

The third step of the argument is the rational conclusion of the first two premises. A Bayesian probability can be assigned to this conclusion of 98%.

The fourth premise – “The universe cannot cause itself” – seems non-controversial. However, cosmologists (driven by their dislike of the way a beginning of the universe points to creation by God) have proposed ideas attempting to challenge this premise. Lawrence Krauss’s book, A Universe from Nothing, was one of the first of these proposals to get a wide audience. The idea, first proposed by Edward Tryon, is that the universe is a quantum fluctuation. Physicist Don Page pointed out that Krauss’s idea is not really “from nothing” because quantum fluctuations require a quantum field (which is something). Since the quantum field must exist before the Big Bang, this is not a universe from nothing at all.

Alexander Vilenkin modified Tryon’s idea referring to the origin of the universe as a “quantum nucleation” that happened before the existence of any matter, energy, time or space. In order words, the quantum nucleation happened in the absence of a quantum field. Not only is this logically incoherent as things happening before time require time, but this idea is problematic for most physicists because the theory makes an untestable claim. Scientifically untestable claims are not scientific. The probability the universe can cause itself is <1%.

The real Creator would be the one who created the intermediate being. An infinite causal regress is a logical absurdity and has been rejected by philosophers since the time of Aristotle. A Bayesian probability can be assigned to this premise of 99%.

“This uncaused, immaterial and timeless cause of the universe is what everyone means by God” is largely uncontroversial. A Bayesian probability can be assigned to this premise of 99%.

“Therefore God exists” is a rational conclusion. A Bayesian probability can be assigned to this conclusion of >95%.

Whether this God is the God of the Bible or some other God is a separate question and requires additional evidence and reasoning.

A Call To An Intellectual Faith

Why the pulpit must be political

Is Religion the Practice of Avoiding Truth?

Do I Have to Be Absolutely Certain Before I Can Say Christianity Is True?

Are You Good Enough For Heaven?

How to Get Men to Church